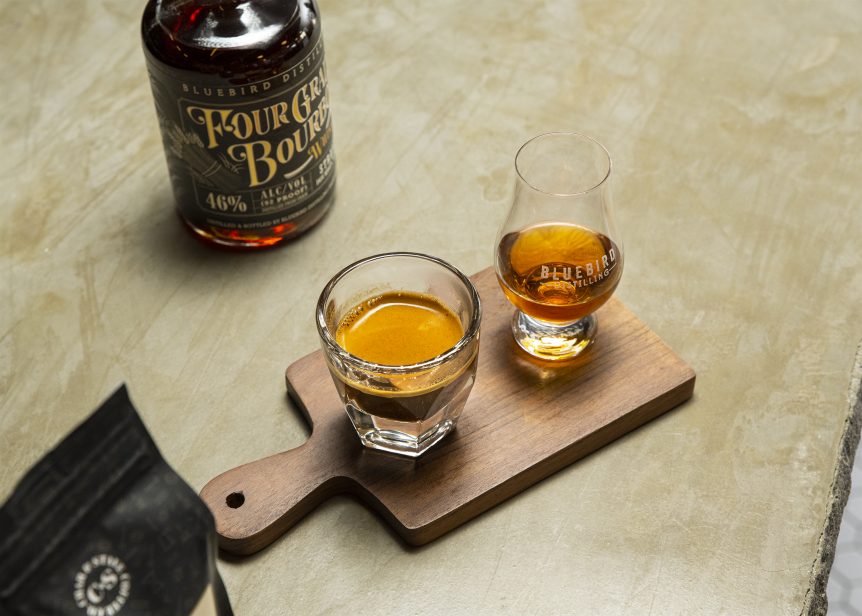 PHILADELPHIA, PA (September 2, 2022) — Get your snifters ready — September is National Bourbon Heritage Month! To celebrate, we’re paying homage to some of Pennsylvania’s spirited homegrown brands that  continue to innovate the category while honoring the state’s historical ties to agriculture and spirits production.  Whether for educational or epicurean value, read on to learn more about the ways that hometown-ish heroes New Liberty Distillery, Bluebird Distilling, and Char & Stave, as well as Louisville-native Coopers’ Craft Kentucky Straight Bourbon, are operating at the nexus of tradition and innovation in the spirits world.

We’ve also rounded up a list of locales from Ardmore to Phoenixville to Philadelphia where the bourbon is flowing; be that neat, on the rocks, mixed into a cocktail, in coffee (yep) or in a bottle purchased to-go. See below for the best where-to’s for enjoying bourbon on-premise or brought home, with info from Art in the Age and sister distillery Tamworth Distilling, The Twisted Tail, Hyatt Centric Center City and adjacent restaurant Patchwork, Bluebird Distilling and sister shop Char & Stave, and Rex at The Royal.

New Liberty Distillery, the South Kensington craft distillery and home to spirit lines including the now-revived heritage Kinsey brand, offers visitors a historically-minded introduction to the legacy of American spirits through tastings including Dutch Malt Whiskey, which hearkens back to the Pennsylvania Dutch settlers, Bloody Butcher Bourbon, made with heritage grains, bright-red Pennsylvania corn varietals, Millstone Rye Whiskey, a pillar in celebrating Pennsylvania’s role in the original production of rye whiskey during the country’s infancy, and more.

Rob Cassell, Master Distiller at New Liberty Distillery, is working to bring Pennsylvania back to the forefront of bourbon and whiskey prominence with these spirits alongside the revival of historic brand, Kinsey – and with Bloody Butcher Bourbon, the celebrated bourbon made exclusively with PA heirloom corn and heritage grains. In celebration of National Bourbon Heritage Month, the distillery is releasing a new take on Bloody Butcher — the highly-coveted (and limited!) Bloody Butcher Sour Mash Straight Bourbon Whiskey.

More info on the Bloody Butcher Bourbon — In the early 1800s, European settlers in the southern United States blended their corn with a native variety. The result was Bloody Butcher corn: instantly recognizable for its striking deep red kernels and legendary fruity, buttery flavor. Unsuitable for industrial scale farming, this heirloom variety is grown by only a few farmers. New Liberty Bloody Butcher Bourbon celebrates our nation’s early agricultural heritage with the use of these low-yielding kernels and local PA ingredients; incorporating Bloody Butcher corn sourced from Castle Valley Mill in Doylestown, PA, just 25 miles from New Liberty Distillery, and combined with malted rye and barley from Deer Creek Malthouse.

Bluebird Distilling, Phoenixville’s award-winning grain-to-glass distillery and best known for its signature Four Grain Bourbon (a bourbon crafted with red winter wheat, rye, corn, and barley, unique compared to most bourbons which only contain three grains) makes for an ideal spot for bourbon-lovers to sit, sip and savor eight types of bourbon and eight types of whiskey during National Bourbon Heritage Month.

Bluebird Distilling houses a stacked bottle shop that features their full catalogue of award-winning spirits, including the signature Four Grain Bourbon, brand-new, twice-aged Double Barrel Bourbon, limited new release Four Grain Bourbon Finished in Jamaican Rum Barrels, and Four Grain Bourbon Barrel Strength – 7 Years Old, the distillery’s oldest and highest-proof spirit to date, aged for seven years and ringing in at a whopping 112 proof — and much more. All spirits are available for purchase in the bottle shop, along with merch like branded baseball caps, tees, hoodies, and more – Bottles are also available for purchase at Bluebird Disitlling’s sister store, Char & Stave, the new Ardmore café-by-day, cocktail bar-by-night, marked by the slogan “coffee made by whiskey people.”

The full catalogue of Bluebird Distilling spirits is available online here to ship across the state of Pennsylvania, with most spirits available in PLCB stores statewide.

Char & Stave, sister shop to Bluebird Distilling marked by the slogan “coffee made by whiskey people”, is a full-service café by day, cocktail bar at night, and the area’s newest bottle shop where imbibers can purchase a bevy of spirits from sister distillery Bluebird Distilling, including Four Grain Bourbon, White Rye Whiskey, Phoenixville Whiskey, American Whiskey, and more, that make a perfect addition to any bar cart during National Bourbon Heritage Month (and beyond). Self-proclaimed bourbon nerds will savor Char & Stave’s Bourbon Barrel Aged Coffee Beans, ideal for brewing a cup of morning joe or crafting a buzz-worthy cocktail inspired by Char & Stave’s signature cocktails.

It wouldn’t be National Bourbon Heritage Month without Coopers’ Craft! This September, imbibers are invited to join in on a month-long celebration of the all-American spirit with Coopers’ Craft Kentucky Straight Bourbon, Brown Forman’s newest bourbon in twenty years.

Coopers’ Craft honors the company’s more than 70 years of barrel-making and wood expertise as it is the only major distiller with its own barrel cooperage. Offering not one, but two bottles of bourbon, Coopers’ Craft Original 82.2 Proof and Coopers’ Craft Barrel Reserve 100 Proof, both bourbons start with the same spirit but are matured using different wood processes and techniques from the barrel resulting in final products having distinct flavor characteristics and profiles – delicate and mild to powerful and robust.

The original Coopers’ Craft Bourbon is aged in a traditional American White Oak Barrel. After aging, the bourbon runs through a special beech and birch charcoal filter finishing process, creating a smooth and gentle bourbon that is bottled at 82.2-proof. As for the Coopers’ Craft Barrel Reserve, it is aged in a unique chiseled and charred American White Oak Barrel that allows the whiskey to interact more deeply with the wood, creating a more robust and complex flavor profile that is bottled at 100-proof.

Taste: A true sipping bourbon with soft lemon custard and baked apple notes layered over a bed of toasted and fresh oak character seasoned with a light dusting of spice.

Finish: Rich and smooth with lingering hints of fruit.

Nose: Fresh hewn oak with hints of smoke and char are spiced with hints of cinnamon and leather atop a layer of orchard and citrus fruit.  Sweetened with a sprinkling of vanilla wafer crumbs.

The Twisted Tail, Headhouse Square’s Southern-inspired restaurant, bar and music venue known for its extensive brown spirits collection and nightly live blues, offers a free-to-join Bourbon Club program, perfect for amateur and seasoned whiskey enthusiasts alike – and what better time to join than during National Bourbon Heritage Month? Members receive a membership card that is kept at the bar and contains a list of 70+ bourbons, whiskeys, ryes, and scotches, all offered at The Twisted Tail. The goal: when a member manages to drink a 2 oz. pour of every spirit on the list, they become a Bourbon Club “Finisher”, granting them a permanent 20% discount on all whiskeys and a custom engraved glass kept at the bar atop a special shelf!

As part of Bourbon Heritage month, The Twisted Tail is also hosting weekly Meet the Maker events every Friday in September, featuring two to three whiskey brands and opportunities for one-on-one conversations with experts and master blenders. The events are free to attend with RSVP and are kept intimate with limited space. Feel free to reach out for more details about these events.

Every Thursday from September 8 to September 29, Bluebird Distilling will be offering complimentary tastings of its flagship spirits, plus new and limited releases, from 4-6 pm in the second floor lounge at Hyatt Centric. Guests will also be able to purchase bottles of Bluebird Distilling spirits, including the signature Four Grain Bourbon, Four Grain Bourbon Finished in Jamaican Rum Barrels, and Four Grain Bourbon Barrel Strength, the distillery’s oldest and highest-proof spirit to date, aged for seven years and ringing in at a whopping 112 proof.

On-site at Bluebird Distilling, Phoenixville’s award-winning grain-to-glass craft distillery, imbibers can catch some rays on the sunny patio, cool off underneath the veranda at the expansive outdoor bar, or relax inside at the rustic, high-ceilinged bar and tasting room, all while sipping their way through the extensive list of brown (and clear) spirits offered by the Chester County distillery in a snifter or a craft cocktail. The distillery offers a robust list of whiskey and bourbon-based cocktails, see below:

Bluebird Distilling also houses a stacked bottle shop that features their full catalogue, including the brand-new, twice-aged Double Barrel Bourbon, limited new release Four Grain Bourbon Finished in Jamaican Rum Barrels, and Four Grain Bourbon Barrel Strength – 7 Years Old, the distillery’s oldest and highest-proof spirit to date, aged for seven years and ringing in at a whopping 112 proof — and much more. All spirits are available for purchase in the bottle shop, along with merch like branded baseball caps, tees, hoodies, and more – Bottles are also available for purchase at Bluebird Disitlling’s new sister store, Char & Stave, the new Ardmore café-by-day, cocktail bar-by-night, marked by the slogan “coffee made by whiskey people.” The full catalogue of Bluebird Distilling spirits is available online here to ship across the state of Pennsylvania, with most spirits available in PLCB stores statewide.

In addition to selling bags of premium roasted coffee beans, available in 5+ roasts including premium BourbonBarrel Aged Espresso Beans, Char & Stave also serves as a bottle shop featuring a bevy of spirits from Bluebird Distilling, spanning signature products such as the Bluebird Distilling Four Grain Bourbon, Phoenixville Whiskey, American Whiskey, Juniperus Gin, and more. The full catalogue of Bluebird Distilling spirits is available online here to ship across the state of Pennsylvania, with most spirits available in PLCB stores statewide.

Rex at The Royal, Philadelphia’s home for elevated Lowcountry fare housed in the historic and newly rejuvenated Royal Theater, is home to one of the more expansive selections of bourbons and brown spirits in the city – and totes a libations menu that boasts top-tier bourbon and whiskey-based cocktails ideal for sipping during National Bourbon Heritage Month. See below:

The Graduate Hospital locale has also sweetened the deal on its revered Burger, Shot + Beer special, a carry-over from Rex at The Royals’ former self, REX 1516. The Burger, Shot + Beer special, available on Sunday and Monday nights, exclusively in the bar area, is comprised of Rex’s signature all beef burger served with a crisp Sojourner Lager (Sojourn Philly’s signature brew crafted in collaboration with Neshaminy Brewing) and a shot of well whiskey, now available at the reduced priced of $19.

COOPERS’ CRAFT is a trademark of Brown-Forman Corporation. ©2022. All rights reserved.

To find out more about responsible consumption, visit Responsibility.org and OurThinkingAboutDrinking.com.

All other trademarks and trade names are properties of their respective owners. 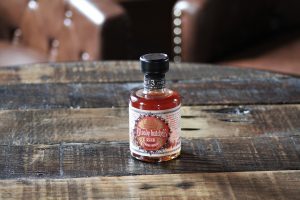