July 26, 2022 – Millstone Spirits Group, the ownership arm of New Liberty Distillery as well as acclaimed heritage brand Kinsey and ALCO ready-to-drink canned cocktails plus newly acquired Faber Liquors, Escape Goat Seltzer Cocktails, and more, is pleased to announce two-time Superbowl Champion, former Philadelphia Eagle, and noted philanthropist, Malcolm Jenkins, as a Board Member and Investor along with his holding company, Malcolm Inc. This exciting addition arrives on the heels of the 1.4-million-dollar acquisition of Faber Distilling and assets, as well as the craft spirits group amassing an impressive 12 medals at the ADI2022 International Spirits Competition.

Under the leadership of Master Distiller, Robert Cassell, New Liberty Distillery has developed a deserved reputation for creating unique and authentic craft spirits. Joining forces with two-time NFL Super Bowl champion Malcolm Jenkins, the duo have drawn up a play to tackle the disparity and lack of diversity plaguing the craft and spirits industry. They will source barley, wheat, rye and corn exclusively from Black and Brown farmers to craft an entirely new delicious, grain-to-glass, scratch-bourbon that “will help make serious systemic changes,” declared Jenkins.

Cassell and Jenkins are seeking out minority owned farms that produce chemical free, non-GMO grains to partner with the letters of intent committing to purchasing current and future crops, providing a viable resource for revenue in the coming years. The quest for these specific farmers is no easy task.

“Until we started this process, I honestly had no idea how challenging it would be to source yellow dent corn from a Black or Brown farmer – anywhere in the United States,” said Cassell. He continued, “Almost every other celebrity brand fakes it, they merely white label a spirit and are paper champions. This whiskey, however, will exemplify Malcolm’s altruism through genuine, real, and impactful social change that is long overdue for our industry. In short: we look forward to creating fanciful block chain whiskey, with a social purpose.”

The efforts of this profound collaboration have caught both local and national media attention, making headlines and mentions in various big-time publications including: Yahoo News, Yahoo Finance, Black Enterprise, Robb Report, Afro Tech, Sports Illustrated, CBS Philadelphia, The Philadelphia Inquirer, Philadelphia Business Journals, and Billy Penn. The work of the duo is even being recognized by some of booze’s top-shelf publications such as Fred Minnick, Whiskey Raiders, The Bourbon Flight, and The Whiskey Wash.

Farmers interested in getting involved are encouraged to reach out to info@newlibertydistillery.com. 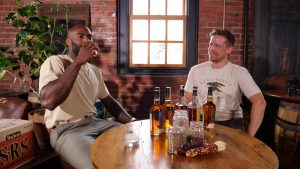