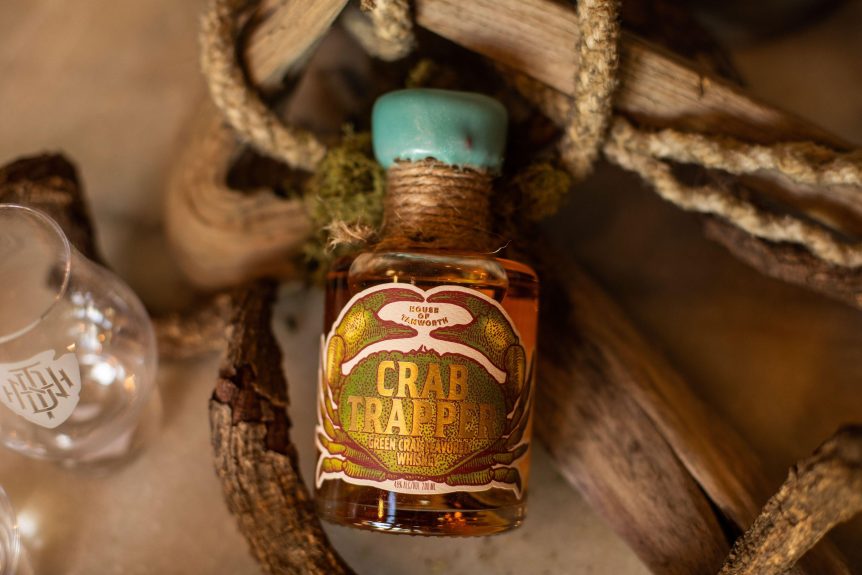 June 30, 2022 – Steven Grasse and Tamworth Distilling, the makers of famed wilderness-inspired spirits such as Eau De Musc, The Deerslayer Whiskey, and Bird of Courage, have crafted a new spirit sure to make their competitors green with envy: House of Tamworth Crab Trapper – Green Crab Flavored Whiskey. Made from bourbon and distilled using a modified sour mash approach, aged just shy of 4 years to attain the same grain bill as Tamworth’s coveted Old Man of the Mountain Bourbon, this spirit is then infused with New England green crabs. Since its May 27th release, the spirit has gone viral, with mentions across multiple renowned outlets such as the Associated Press, Forbes, VinePair, The Washington Post, MSN, Yahoo!, The Boston Globe, Food & Wine, CBS Mornings with Gayle King, Tony Dokoupil and Nate Burleson, Insider, Delish, The Late Show with Stephen Colbert, and many, many more.

Green crabs can be a shell fisherman’s nightmare – burrowing up 6 to 8 inches into the sand and eating up to 40 or 50 clams, oysters, or mussels – a day. Along with being a nuisance to fishermen, they are very destructive to the ecosystem and are worsening with the increase in water temperature because of climate change. They have few natural predators and currently, there is no strategy in place to control the populations of green crabs and there is no real commercial market or fishery for these invaders.

With the help of University of New Hampshire’s NH Green Crab Project, Tamworth Distilling harvested over ninety pounds (thousands) of green crabs from Seabrook New Hampshire. After harvesting the crabs are transported to the distillery where the crabs are cleaned and cooked down to crab stock. After cooling, the stock is fortified with Tamworth’s own Neutral Grain Spirit and distilled on Tamworth’s large rotary vacuum until the ideal crab essence is achieved.

This crustacean concoction was then blended with the bourbon base and steeped with a custom spice blend mixture consisting of paprika, bay, mustard seed, coriander seed, dill seed, cinnamon, clove, and allspice – reminiscent of a low-country boil. As a result, the spirit presents strong notes of maple, vanilla, and caramel on the nose, with the more dominant flavors like cinnamon, clove, and all-spice giving off an unexpected heat likened to what distillery founder, Steven Grasse, describes as a “briny and better Fireball.”

Crab Trapper (92 proof, 200 ml, $65) is available in limited quantities while supplies last online at Tamsworthdistilling.com and at Tamworth Distilling in New Hampshire and Philadelphia’s Art in the Age. 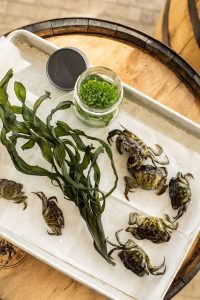