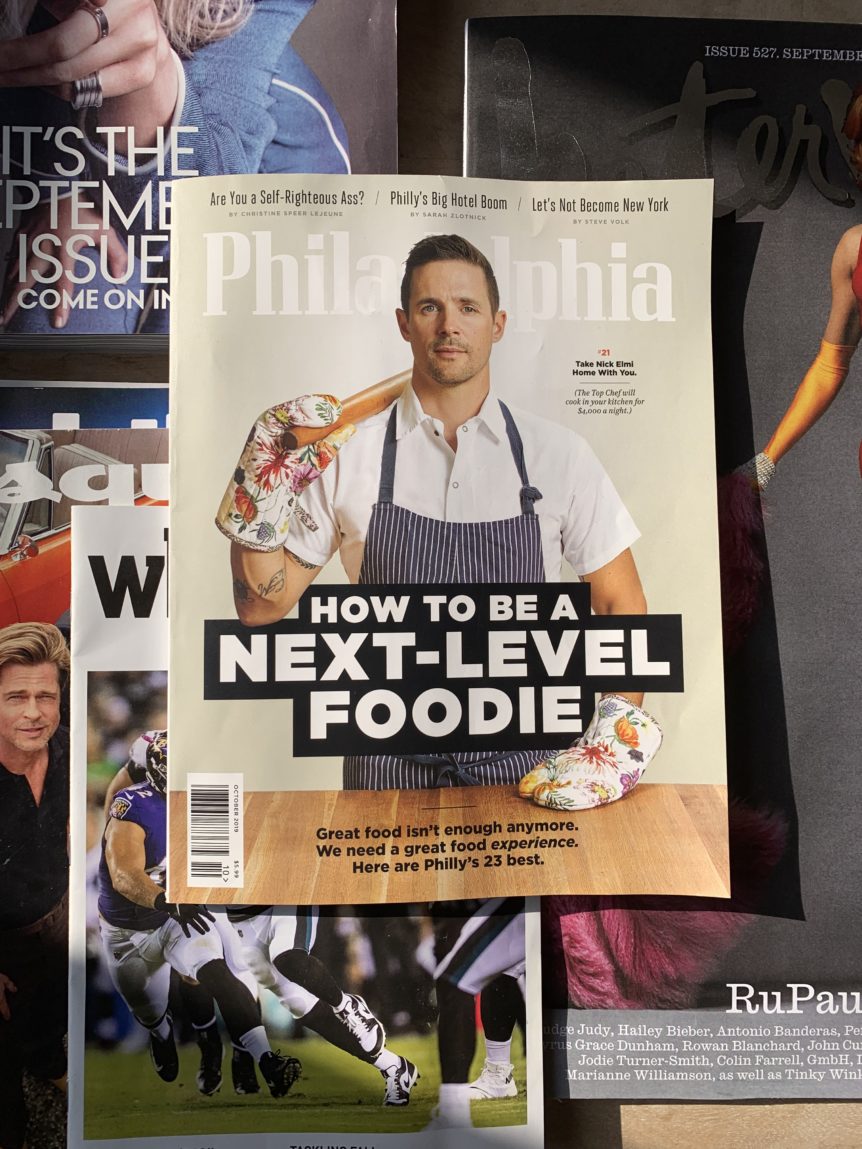 The spotlight shines on Chef Nicholas Elmi for his front cover feature on Philadelphia Magazine’s October edition. Referred to by top Philly food critic, Craig LaBan, as “One of the City’s Most Brilliant Kitchen Stars,” Elmi is feeling the heat, but definitely not from the kitchen. Robed in a chic pin-striped apron, this Chef has certainly earned his stripes.

Chef-owner of Royal Boucherie, Laurel, and In The Valley, Elmi’s generous contributions to the Philadelphia restaurant scene have received decorated remarks ranging from Philly’s Best Charcuterie at Royal Boucherie, to the highest possible bell score at Laurel by the Philadelphia Inquirer’s award-winning criticism. LaBan referred to Elmi’s burger at Royal Boucherie as a “fistful of juicy pleasure.” And reminiscing about his favorite meals of 2018, the Boucherie Burger was a stand-out as his “current Philly favorite.”

The Season 11 Top Chef, and twice nominated Best Chef Mid-Atlantic by the James Beard Foundation, first moved to Philadelphia at 19. Upon arrival, it was love at first sight, but his mastery was requested in illustrious kitchens afar, namely New York’s Daniel and Paris’ Guy Savoy. The foodies of the City of Brotherly Love count their blessings it was Philadelphia that captured Elmi’s heart and here is where he hangs his apron.

The Chef’s focus is keen on refined, French-inspired dishes. Royal Boucherie, nestled in Old City, welcomes any dining cravings from a beer and a bite to a four course wine-pairing. Sharing similar French-influenced flavors, East Passyunk’s Laurel and neighboring BYO restaurant In The Valley, both offer an intimate dining experience. Enter In The Valley to indulge in caviar service and champagne, or bring your own bottle. Laurel offers local seasonal fare and an intense six or nine course tasting menu.

In case you didn’t already have enough options to experience his artistry, $4,000 will get you an extra special dinner reservation: six courses royally prepared by Chef Nicholas Elmi himself, right in your own kitchen.

This front cover, award-winning Chef is the crème de la crème, preparing food sure to savor, whether you invite him over to your kitchen, or visit one of his.